So, I'm feeling really indifferent about this blog, and blogs in general. I used to get lost in cyberspace, reading all about my friends and catching up with long lost roomates and such. I still do that occasionally, but I've been too busy and otherwise occupied with darling Ella that I don't make much time for it anymore. And I think it's a good thing.

And while I've never been super inclined to blog on a regular basis, now it is really suffering. And I don't think I really care! I've been working out more, gardening, and working on fun projects - and I like this off-line version of myself. I would rather live my life than take the time to write about it. I don't know if this is a general feeling among folks, or if I'm the only one who is stricken with cyber overload, but I need a break. I will still facebook on a semi-regular basis, only because it is on my phone, but I'm even tempted to delete that app because I just need to be in the moment, in reality, and not constantly checking my wall or blog for comments. (As I write this, cute Ella is pawing at my leg, begging me to play with her... so off I go!)

So, this is a post to make you aware of my cyber sabbatical. Do not worry, I am still alive. And chances are that if you are a part of my regular life, you'll probably see more of me, so this will not be a big loss! I hope you all have a great summer! 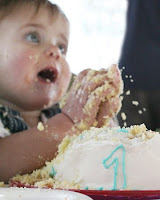 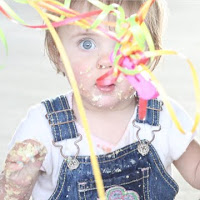 Happy First Birthday, sweet Ella Grace! We love you more than words can express. You have learned so much and grown so quickly. Thanks for putting up with us as your parents! Here's to another fun, crazy, exciting year!
Love,
Mommy

A Vietnamese friend of ours taught us how to make spring rolls and they are SO easy and SOOO good! I thought I would share since they were such a fun time! 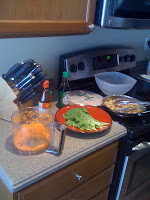 Here is what I used :
-Round rice paper wrappers
-Lettuce leaves with the tough middle part removed
-Shrimp sauteed in garlic and soy sauce (you can use chicken, tuna, whatever!)
-Shredded carrots and sliced celery (I prefer cucumbers, but we didn't have any)
-Vermicelli rice noodles (you buy them in a package, then soak them in warm water until they soften)
-Peanut dipping sauce (made from peanut butter and Hoisin sauce and water)
-Hot chili and garlic sauce

You need a few things from the Asian market, and if you live in Salt Lake, there's one on 90th south and just east of the freeway. I bought the rice paper wrappers and sauces there, as well as the noodles. 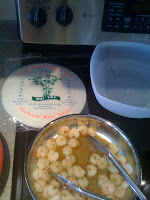 You just soak the rice paper for a few seconds in hot water and put it on your plate. It becomes stretchy like saran wrap. Then layer lettuce, noodles, shrimp, veggies, and sauces, and wrap it up like a burrito. Voila! 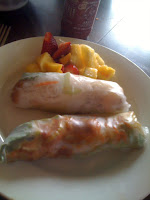 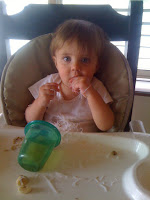 (If anyone wants the actual recipe, I can definitely email it to you! Just let me know!) 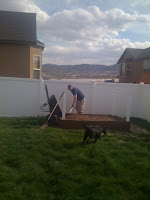 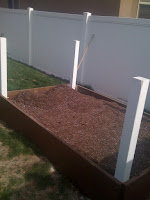 Well, our garden box is in place and filled with what is supposedly the best soil for planting a garden... we'll see! Next we need to screw on the pickets and plant some veggies!

Today is my first mother's day, so I decided to take a little moment for myself last night and get a pedicure. I was so excited to just sit for a minute with no one climbing on me or crying, but after all the day's adventures and laundry and dishes and yard work, I didn't showered and get out the door until 8 pm. Shoot.

The first place I tried was closed. The second, as well, so I gave up and decided to go grocery shopping at walmart instead. But to my surprise their nail salon was open! It's a mothers day miracle! I asked the girl if they had time to do my toes, and she ushered me back, saying "We never close, never close."

I enjoyed a relaxing few moments reading fashion magazines and catching up on facebook, then as she was finishing, the boss lady told me I had to pay in cash, since she just closed the register. What? Who carries cash anymore?!? But I told her I could walk down to the ATM once my toes were dry... No biggie.

Turns out, as usual, that nothing is simple for me! I walked to the ATM and supposedly put in the wrong PIN, and the machine ate my card!! So I tried a different card, and it didn't even let me type anything... It just beeped and told me to contact the bank during normal operating hours. Grrrrrr!

So, I bought my few groceries ad paid with a credit card, hoping they would let me get cash back... But strike three, I'm out. So I headed back to the salon and told her I had no way of paying, fearing I would have to go in the back and sanitize foot tubs or nail implements, but the nice lady said I could bring my money on Monday. I thanked her profusely, thinking the whole time, "this could have all been avoided if you just let me pay with my dang debit card!!"

Oh well, my toes look fabulous and I did get a little me time, so I guess it was all worth it! Happy Mother's Day!

Have you ever been to the website wikihow.com? I stumbled across it tonight while trying to figure out how to sew a zipper fly. That proved to be much more difficult than I thought, so instead of continuing my sewing project, I clicked on the "surprise me" button at the top of the page. And who doesn't like a good surprise?!

I was pleasantly "surprised" to find myself perusing pages about ANYTHING and EVERYTHING known to man. In fact, in the last hour, instead of sleeping, I have learned how to avoid fire ant stings, how to do a a correct handstand, how to create a Halo 3 montage, how to create a classic wardrobe, and how to apply goth makeup. (I think the last two go especially well together!) I can't stop myself!

My dream of a garden is a bit closer this week!

It started as a pile of wood, bolts, and nuts. 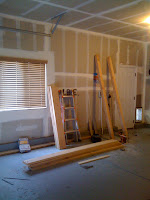 Then we cut, screwed, and painted pickets. Jovi is overseeing the demise of her tyrannical reign! 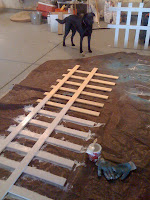 Jon cut posts and 2x8s for the box. It is going to be bigger than I thought! 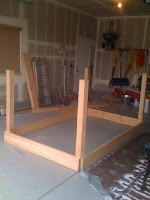 Ella loves being outside! (How toxic is west bench dirt?) 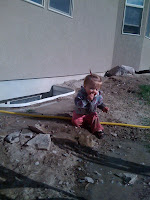 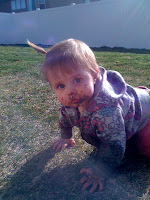