The Queen of Clumsy 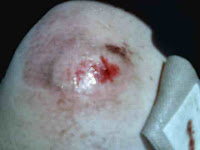 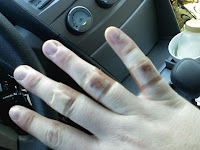 I have pieces of Wal-Mart in me.

Yesterday I had a quick stop to make at the Wal-Mart, so I pulled in, grabbed the baby, and hustled to the cart corral to pop her carseat on the cart. But just before I reached the cart, my shoe caught the metal bar that stops the carts from rolling out and I found myself completely sprawled flat on the parking lot. To make matters worse, I was in a skirt that I'm sure was over my head. But what I was most worried about was Ella. She had been sleeping and the 3 foot drop she just took scared her to death. She was screaming, I was bleeding, and no one came to help. Not a soul. You and I both know that there are always people in the Wal-Mart parking lot, but at that moment they all sort of disappeared. Thank goodness for carseats because Ella landed right-side-up and is just fine, but as you can see I'm all scraped up... again.

I hate these kind of boo boos because you have to SCRUB and PEROXIDE the open wound or else you are stuck with that black stuff under your skin forever. I've given birth with no painkillers. I've cut the end of my finger off with a rotary cutter. I've broken my foot in four places. And THIS is a pain I absolutely cannot handle. I can't get myself to do it. So I think I'm stuck with some Wal-Mart becoming part of me. I think that's how Sam Walton wanted it - a little Wal-Mart in everyone.

We have been so busy that I haven't had the chance to post about one of the FUNNEST (yes I know it's not a word) weekends I've had in a while. Last Saturday Ella and I were settling in for a lame evening of bread making and Oprah re-runs on the TiVo, when I got a phone call from my friend Caity. First - it was odd that she called my house phone. I don't even know that number. Second - it was odd that after our usual pleasantries she informed me that she and her husband were kidnapping my husband to Wendover and if I ever hoped to see him again I should probably come too. So, though I was elbow deep in yeast and flour, I fed the baby and packed up for the adventure of my life! It may or may not have happened that way...

Since Caity is an Uber-cool blogger, go to her blog to read about the adventures we had. There is no way I could describe it any better. 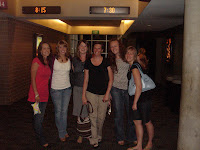 Wow. I was so excited for last night. I REALLY needed a break. I met my friends Caity, Brenda, Jessica, and Holli for dinner at Paradise Bakery, then we went to see a movie with Alana and Annie. It was so nice to get out of the house and have a reason again to do my hair and makeup. And the best part was that I didn't think about the baby once. Okay, maybe once... or twice. But thanks to my buddies for helping me feel a little bit more like myself again! I love you!

Pregnancy kills brain cells. I am living proof. I thought some of my intellect was coming back in the two and a half months since Ella was born, but today I proved myself wrong. I used to be the "go-to-girl" for computer questions and technology stuff, but now... well, read on.

Today I was bound and determined to email Caity some photos from our "date" last night, expecially since she didn't believe that I would. So I dug the camera cord out of the office (actually Jon did that for me) and figured out how to plug it in the camera. I fiddled with buttons and checked my computer hard drive, but iPhoto would NOT come up and the computer wouldn't recognize my camera. SO FRUSTRATING! I was seconds away from cursing my Mac (blasphemy!) then calling Jon, but when I stood up to get my phone, I realized the OTHER end of the cord wasn't plugged in to the computer. Duh. I want my brain back!

I have been doing more blogging and blog-stalking lately and came across this amazing baby clothing designer, V. Lou Textiles. They're giving away some darling things, so if you want to check it out, go here! 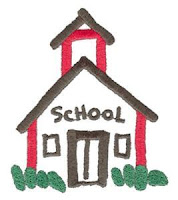 For as long as I can remember I have dreaded the end of the summer. DREADED it. The moment school supplies and corduroy pants went on sale I would get a pit in my stomach and an anxious feeling came over me because it meant that school would start soon. From Kindergarten to this last summer I have had to pack a million fun and relaxing things into the 2 1/2 months between the end of one school year to the beginning of another. And once I became a teacher (5 years ago) I really got a bad case of nerves the week before the big first day of school. (And they think only the kids are nervous!)

Don't get me wrong. I loved going back to school and loved being a teacher even more. But I am happy to say that this is the FIRST summer in my entire life that I don't have to freak out. Yesterday I calmly browsed the discounted school supplies without feeling the compulsive need to buy 400 pocket folders or 25 glue sticks. And I bought Ella a "Fall" outfit without feeling a sense of loss for my free time or relaxation. (Yeah... rest and relaxation went out the door on May 19 when she was born!)

I'm proud to say that while my former colleagues are gearing up to return to work I am up to my elbows in dirty diapers and bottles - and I love it! I thought I would feel a bit lost without my main identity being a teacher, but I absolutely am not afraid to say:

I'M A STAY-AT-HOME MOM!
(Thanks Jon for making the sacrifices you have to make this possible. I love you!)